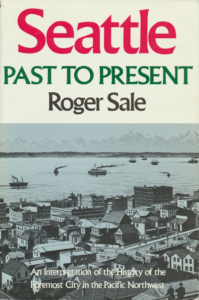 This radio series, featuring University of Washington English professor Roger Sale, traces the development of Seattle as a city from the arrival of early settlers through the early 1900s leading up to World War I. The series originally aired on Jack Straw Foundation’s KRAB Radio in 1970. These programs were based on Sale’s research for his book about the history of Seattle, Seattle Past to Present, first published in 1976. Jack Straw recently digitized this series as part of an effort to preserve our KRAB Radio and other Jack Straw archived collections.

Early episodes in the series cover the arrival of the Arthur Denny party in Seattle, as well as other influential newcomers such as Carson Boren, William Bell, Charles Terry, Henry Yesler, and Doc Maynard. Sale provides a complete profile of Denny, his strengths and disposition. Listeners learn about the profound impact he had on shaping Seattle and the decisions that led to much of the city’s layout and prosperity.

In other episodes, Sale outlines Seattle’s economic and political development. He discusses the introduction of the railroad and political movements, such as the Anti-Chinese Affair. Sale makes a comparison between Tacoma and Seattle and the population explosion that made Seattle the major city in the Northwest.

Other topics Sale covers include the designing of Seattle parks, city platting, businesses and life downtown, range of employment, and Seattle society.

Select Programs from the KRAB Archive